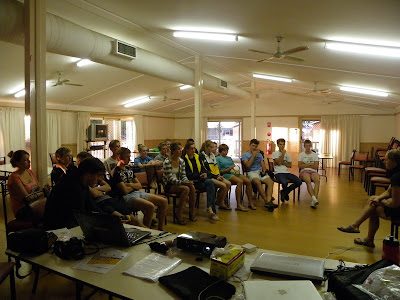 Hanny has their attention

Nineteen juniors from around Australia began the 2012 orienteering year with the first day of camp in Canberra. After the gathering was complete and lunches consumed the squad ran from the camp ground, across the road to Mt Majura West for the first training exercise. With Hanny, Josh and Karen along to help all were keen to do well and impress the experts.
Each athlete had to hang a flag, run around a predertermined course using the flags hung by their fellow athletes back to their own flag and bring it in. If they were not fast enough it was likely that some of the flags on their course had gone.
Michele was adamant she had hung hers in the correct place but no one could find it. It turned out that someone had actually stolen it. Don't tell Grant anyone!

Back at camp Hanny gave a great talk on what it take to be a champion orienteer. Very informative and for most inspiring. 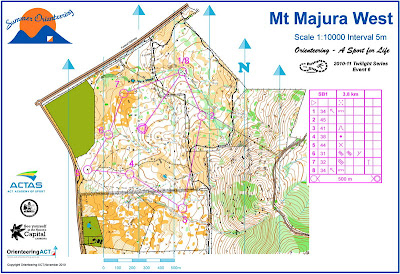 One of the courses
Posted by Roch Prendergast at 9:47 PM