After an 'exciting' opening ceremony the team was ready to race the first JWOC race, The Sprint!

Like an open bus to a man with empty pockets, anything was possible in the sprint. The mood was tense as the quarantine time drew closer and closer to go time. The sweat pours began to open in the rather stuffy quarantine zone. Provided, the bananas were soft, the grapes, un-seeded, the toilet queue - unbearable. 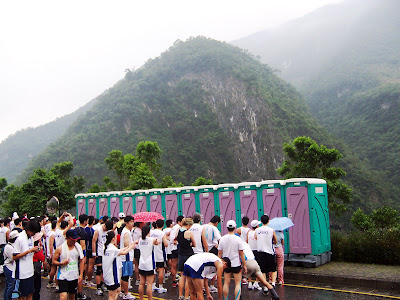 Walking out the door like a spring lamb stepping into the sunshine, we were handed a small, tiny, petite, minuscule, miniature, micro, petite, nano sized orienteering memo. What could possibly be secluded on the other side of this petite piece of felled timber that had undergone pretuitious processes of paper production? Our minds were open, our palms sweaty, knees, not so weak, Arms ready. The wind of the eastern shore blew slightly, like a breath of life to a dying man. Suddenly, a harsh western mountain gush blew, and all was revealed! BOOM! The piece of processed timber was not a model map! But a Warm-up map.

The pitter patter of racing flats on the Slovakian cobble stones was creating angst amongst the team. as the clock ticked. heart beats stopped, then started, then stopped then started again. Nerves were crawling around like worms on the pavement after a heavy rain. Tick, Tick, Tick, and Tick. It continued until the first recognisable Monica arose. 'Yan Laywfaywd' was the sound that was expelled from the local Kosician starters mouth. The run from the SI security check to the control descriptions was memorable. A long straight taped route along a back road was like running the bulls in Spain. Finally, the time had come. The JWOC 2012 sprint, it had begun!

The course opened with a moderate level of difficulty. the excitement of the first day of JWOC cause few distortions to runners times. Other runners suffered immemorial explorations of incorrect controls (not from the team of Australia however) and caused their times to dissipate in to thin air. As if a small black hole had been created and any sort of time was a precious commodity. As the rest of the course drew nearer and nearer memory was lost and time, again was essential for all those showered by the light of memorabilia and members of public, onlooking as not a form of interest, but rather a form of Excitement!

The race of the day was so exciting that all recounts were lost in translation. Hence, the only possible way to describe 10 members runs with one central theme was in the form of a contemporary poem. It was written in the early moments of the conclusion of the sprint by several amateur poets of whom go by the name of 'Aussie Boys'

As chests crossed the finish line,
Moments drew closer,
To the final finish time,
The speaker talked,
Like a commentator, for a world championships sprint.
'Yan Lawford' was the only winning time hint.
Until, along came Russia and claimed the gold,
And some fine results from Aussie, Was not so cold.

How does one continue to perform over 5 stages of world standard racing in a foreign environment? The answer is not always so simple. Training will always help increase the chances of reaching this goal. However, as the last two days have shown us, having a reputation as one of the best in the world will not guarantee world class results. In many other sports, the one who has been training the hardest and fastest is the one who will win. A sprinter will run 10 seconds in one race, and then come back a week later and run 10 seconds again. This is were our sport is different, we continue to push towards the 'Perfect Run' where everything works just the way we wanted it to. One day you can be 2% off the perfect race and the next, 50% off. All Aussie runners must be admired for being able to come out of a 50% race, turn around and aim again for that perfect run within 24hrs. Stay tuned for the Middle Novela that will be coming your way in just 3 days after the Australian Junior Orienteering Team will race the Middle Distance Final and once again aim for that 'Perfect Run'

Posted by Roch Prendergast at 6:44 AM