JWOC 2012 has arrived and so excitement is at the usual yearly high. Kas and I arrived in Slovakia on Tuesday the 19th fresh and energised off the boat after a tough weekend racing at Jukola, and sailing.. We met up with Matt Ogden and made our way out to Rožňava where we spent the next week training on the long distance maps situated around the area. Life was good! Training and sleeping were the only things on our daily plan. We were making the most of the cheap life - staying in a pretty classy hotel with full board for less than we would have paid for a campsite back home!


On the 26th we packed up and made the move to Košice and met up with the NZ team fresh off the plane. A couple of days spent on some middle focussed maps and seeing the sights in the city ( ;) ), and the rest of the Aussie team arrived keen to get in some training!

To start the official training week we travelled over an hour to Dievcenska to get experience in the technical sink hole terrain that replicates the area where the long race will be. It was good to experience the sink hole terrain early on in the week and we all came away with a much better understanding of how to orienteer well in the terrain.  -  Oscar 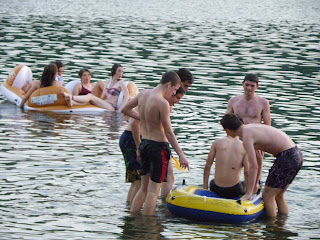 On Tuesday we travelled out to Zeleny Dvor as shown above for some short sharp interval training. The idea was to run hard for about 300m on a track to get the HR up, then some short controls in terrain for recovery, training our ability to process and make decisions when tired. The map and area was amazing, with great visibility and intricate detail. A few of us did a small jog around after just familiarising ourselves with the terrain. The afternoon was spent out at the lake near Bukovec, cooling off from the sweltering heat of the day. Birthday cake was had in the evening to celebrate Lilian's 20th birthday.  -  Alex

Michele's 18th!!!! however the celebrations were stalled by some sickness and not the greatest way for Michele to spend her 18th. breakfast was followed by an eventful 1hour drive out to Torzo and Jastericie Jazero. the negative terrain was a treat just like the sweet sweet nectar of a spring plum! A quicky 30 minute jog  around was enough to excite the team (minus Ian and Kas who were chilling in their beds back at camp) enough to travel across to the more forested map of Torzo - Great Area! Heading home was even more of a journey being stuck behind a truck/trucks for the whole 1.15 hrs. Overall, the day of training was worthwhile. As the sun beamed down across the buildings of Kosice, the team lay in bed thinking of what possible joys the following day had in store for them...as well as sweating like a fat pig, as usual.  -  Olle

Bankov - 9am - Relay training, short mass start intervals, continental terrain with areas of complex erosion/landslip detail. Great training under pressure, whilst barely tiring the legs over the short distances. Michele disappeared with Valerie early on to find a doctor to deal with her bug, and gladly we saw her improve enormously as the day progressed. Most of the team went out to Baziny in the arvo to have a short walk around the area which we'd down some technical exercises on at our previous team meeting. Plenty of teams began arriving today, which built some excitement. Following dinner Susanne set us up with an interesting group exercise where we had to describe a course in words then see if the other groups could draw the course accurately on there map. Finally we made a trip into the town to have a look around which was a first for most of the team. Pizza's were also had by most, as the earlier dinner which was a huge 'apple and curd' slice felt much too like a huge dessert.  -   Kas

T minus 2 days now and Olle & I have just completed a quick track session. Bring on the sprint!!


So now we are nearing the end of the training camp and teams are starting to roll in. This has brought about a much more serious, deep pondering within the boys - how shall we present the much anticipated 'Top 10'...? At least we can rest easy knowing there wont be a top 10 without our names on it....

Posted by Roch Prendergast at 7:23 PM

Stormy night here at Slovensky Raj, 70 km west of Kosice - catching up on past weeks action - fingers crossed the weather cools off for the coming week.Toni and David

Nice post gin, glad you didnt include the uncut version of the last pic....

jwocers - peolpe back home keen to hear your thoughts on the competition and maps so far - please more postings for them.
T&D