The Middle Qualification Day offered some relief to us all with a slightly cooler day than the previous week and a half.  Still a little muggy buch much better conditions. 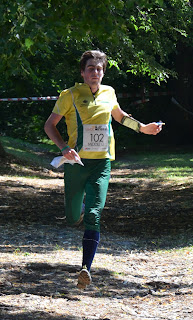 Ian was the star of the day qualifying in 6th place for his heat.  He said he still made errors so with a clean run anything is possible in the final.
Kas had the heart break of watching his 10th place slide down the board to eventually end up at 22nd.
Olle had a very competitive run and looked like qualifying easily until a 4min error on one control cost him a place in the final.  His wiskers were looking blacker than normal until later in the afternoon when he bounced back and began to be more like the Olle we know. 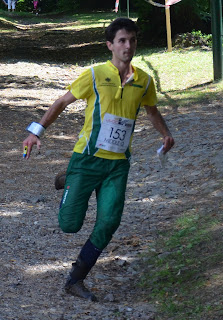 Oscar is still struggling with health issues and struggled to put a clean run together. Both Alex and Brodie had a mixture of competitive legs and errors as they stuggled to come to terms with the low visibility and green sections.

Michele and Heather were the best of the girls with mostly clean runs but some wobbles and uncertainty saw them narrowly missing a qualifying place.  A good run by Michele to bounce back and show some signs of what she is capable of.
Lilian decided to compete today despite a bruised and swollen ankle.  Some rigid taping and she was able to perform well until she came across a section od fallen logs and green marshes that made it difficult for her to move easily through the terrain and as a result slowed considerably towards the end.
All we could get from Amy was her nervous smile and a coment along the lines that it was a day where nothing seemed to go right.  Maybe tomorrow Amy.


Posted by Roch Prendergast at 5:06 AM

I love running and this is my favorite sports. My personal injury attorney arizona just gave me a friendly reminder to not over stress myself from this kind of activity, instead use this to be healthy and fit.

Travel to Bali is very good to booking from Bali Hotels Accommodation. You will find something natural around the island. Exploring the island of Bali, and Best deal of

Are you seeking the hotels with the best rates?! Please kindly visit our website.. Get the special price with the best dealing and free cancellation.. Check these out:

Adventure Great Himalaya is a government registered Trekking company in Nepal. comprised of qualified and experienced professional Nepal Trekking Agency. Adventure Great Himalaya has provided thousands of high quality trekking and tours trips for clients from all over the world. If your interest lies in Trekking In Nepal, Peak climbing, Tours in Nepal and River rafting or cultural sightseeing, our professional and knowledgeable staff is available to make your stay comfortable and memorable. Leave your worries to us and enjoy your holidays in Nepal.
trekking company in Nepal
Trekking Agency in Nepal
Trekking in Nepal
Everest base camp trek
Annapurna base camp trek
manaslu Circuit Trekking
Peak Climbing in Nepal
Langtang Valley Trek
Upper Mustang
Kanchanjunga Trekking

Adventure Great Himalaya is a government registered trekking company in Nepal with qualified and experienced professionals. Adventure Great Himalaya has provided thousands of high quality trekking and tour trips for clients from all over the world. If your interest lies in Trekking In Nepal, Peak climbing, Tour in Nepal and River rafting or Cultural Sightseeing, our professional and knowledgeable staff are available for your service. Leave your worries to us and enjoy your holidays in Nepal.

Trekking in Nepal has never been easy with Adventure Great Himalaya. While you are at it, don't forget to look at our Everest Base Camp Trek Packages.