Yesterday (Saturday) Olle, Heather, Mary, and I enjoyed a lazy day in the 'Penzion' mainly involving trying to get the charger into the computer by throwing from a distance.. The festivities we short lived, because we were unfortunately interrupted by a trip out to Dobrosov for the much anticipated long distance trial. With a cracker view from the top of the map we set off ready for a big one. But our excitement faded when we realised the severity of the hills while on our way to the start.

Us boys were armed with an 8.8k course 600m climb and the girls 6.6km with 450m. Only 90 seconds stood between each starter so the pressure was on for a perfect race. Mary was first cab off the rank followed by myself, Heather, then Olle. With a mostly solid performance, I learned that flow through the more technical areas will be crucial, while also keeping speed up on the longer legs. I finished with a time of 78mins which is not far off what is expected in a weeks time.

Olle was forced to pull out a bit after halfway because of some feet problems, but some have suggested he just wasn't man enough for the route choice legs.. Heather also had a few problems but still managed to battle on and finish the course. Experiencing what must be some people's worst nightmare, running through a tick-infested area, she had to stop for a short time to remove a particularly cheeky tick which was making an attempt on her eye. Mary finished solidly and regained her confidence which took a battering the previous day. 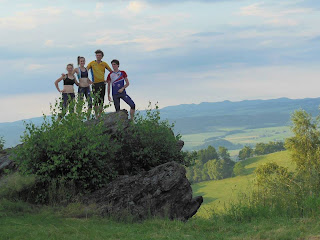 Big afternoon complete, we headed back home to Jaromer to throw down some post race refreshments and contemplate the choices made on-course.

WOW! Mountain I really love to watch. And your post so, whole heartedly appreciated. Regards from International Express Services

Trekking in Nepal and tours operative takes you that further way to guarantee you has an unforgettable adventure that you have been dream of. Benefit, of course there is the Acute Trek Pvt. Ltd. part of choice. We have your choose of Treks Himalaya for 3 days or 30 or more days it depending of your timetable, sleep under lodges or tent. We offer you with the best progressive Nepal Holiday information and itinerary leading focused and modified as per your requirements of Nepal Trekking. It is significant to memorize, though, it necessitate an enough level of physical homework for Nepal tour and must remembers that there is also a psychosomatic assurance in walking in mountains. Trekking in Himalaya is an attempt to encourage Nepal to the exterior world while striving to defend an aged tradition as well as conserve the surroundings for generation to come for Hiking in Nepal. Annapurna Trekking Everest Trekking Langtang Trekking Holiday Hiking in Nepal Holiday Hiking Hiking Holiday Peak Climbing in Nepal Helicopter Tour in Nepal Everest Base Camp Trek Annapurna Base Camp Trek Upper Mustang Trekking