As promised, the much awaited first installation of the 2017 quote list:

Zoe: “Beans are so underrated”
Asha: “I feel like such a domestic goddess now we have a dishwasher”
Jo: “No cookies, no deal.”
Tara: “LET ME CHOP”
Sim: “I’m in a Trivia mood”

Over the last few days, our little JWOC family (proudly referred to as the Brady Bunch due to the balanced gender ratios) have faced the dangers of Finnish bus drivers, unintentional invasion of a military base, and marshes that are on the tops of hills, all in the name of quality training. We continued our JWOC preparation on Sunday with a double sprint session. In the morning we traipsed over to Epila and Hyhky (not pronounced hikey-hikey but Hou-kah) and did three sprintervals of varying lengths. I think we all agreed that it was great to turn the legs over quickly and have a more familiar form of terrain and navigation. Sim arrived at our accommodation not long after we got back and made our group up to a total of 6. That evening we went out for another sprint training this time with Jarrah’s Finnish club, Tampereen Pyrinto. The map Jarvensivu which was used for the Grano Games sprint that Zoe, Toby and Jarrah competed in 3 weeks ago. This map was a bit more relevant for JWOC than our morning training which also meant steeper and a more unique area with lots of small staircases. The most confusing aspect of the map was that some back and front yards were mapped but others weren’t. This meant more intricate navigation was required since we couldn’t immediately assume an area was out of bounds or not.
Monday was our first rest day of the pretraining-training camp and Mumma Zoe (#veganslave) and Caroline woke us up to pancakes for brekkie. Joe arrived in time for brekkie after landing at midnight and making the famous ‘Onni Bus’ trek. Post pancakes, the rest of the day was spent on an extreme shopping adventure by Tara, Caroline and I, then a post shopping feed and nap, with a solid Netflix session to finish up. As they say, train hard, recover harder. And I think we nailed it.
The weather so far on our trip hasn’t been too bad, except for on Tuesday. This day we were doing a Long Simulation (loose definition since we are all still focusing on basic navigation rather than race speed) at Teisko. Overall, this was not our finest hour. We came to a group consensus that there is one 2cm2 patch of the map that we liked and the rest was described with a range of expletives and simply described as “the worst thing ever”. Now looking back, it was definitely made worse by the pouring, freezing cold rain and on a finer day we may have been more positive about the whole experience. But when walking back to the bus with sideways rain coming in our rain coats, a little complaining never hurts anyone. 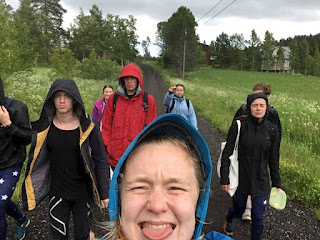 Yesterday was our main middle distance training day. We went to two maps, Pulesjarvi in the morning and Aitovuori after lunch. The day was mostly mishap free aside from almost being arrested for invading a Finnish military base (“Finland has an army???” -Simeon Burrill 2017) and then dodging bullets through a shooting range. Aside from the dangers of being deported or shot, we all enjoyed these maps so much more than the day before and our motivation and enthusiasm has been renewed. 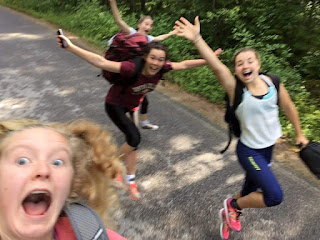 Today we treated ourselves to another rest day which included a post movie night sleep in, breakfast at lunch time and more exploring around the beautiful Tampere. Finally, today Finland is providing us with a more convincing version of #summer with a balmy 20 degrees and tanning conditions.

Stay tuned for more updates from the 2017 Aus JWOC Team.

The first member of our team in Finland was me! Zoe 😊 I came straight to Finland from the Oceania champs in NZ and have been staying with an orienteering family in Hämeenlinna for the last 2 months! It’s been unreal, such an experience to be here, tough at times yes but overall so eye-opening to European orienteering. I have gone in races just about every weekend representing Hämeenlinnan Tarmo; including local comps with roughly 800 competitors, regional champs (including one where Mina Kauppi made an appearance – was stoked to only be 8.5 mins behind the legend frothn) the Finnish middle distance champs, 3 World Cup public races, the Grano Games, Venla and Jukola!

Toby arrived in time for the World Cup races and was mostly staying in Helsinki with Atte Lahtinen and family. The highlight of his time before the team came together was all the pastry’s he ate for breakfast – according to Tara (“no, that’s what he said”). Jarrah arrived in time for the Grano Games around Tampere and has been mostly in Tampere staying with some friends.

Just before Jukola Jarrah and I spent a few days with Atte in Helsinki doing some training on some pretty wicked maps. The terrain in the south of Finland is quite different to around Tampere so although it was not completely relevant to JWOC the terrain was like nothing I’ve run on before. So many beautiful mossy rocks and bare rock in open vibrant green forest.

The next weekend Jarrah, Aston, Toby and I were lucky enough to be in Finland for Venla and Jukola! It was unreal, absolutely #blessed to be there. I ran 1st leg for Venla, the mass start was hectic, nothing like running to the first control with literally hundreds of people running around you. Aston ran 1st Leg for Jukola, Toby and I both ran 6th leg and Jarrah was the Anchor for his team, running 7th leg. We all had quite long courses, all over 11km but the excitement and adrenaline of running in a relay like Jukola gave us that extra bit of motivation. The setup of Jukola was amazing, 2 massive live screens with countless people staying up all night watching every moment. The winning teams came in at about 7am, before I even got to start my leg – makes you realise how good they are.

After Jukola Jarrah, my host family and I went to Koli national park and visited one of Finland’s national views. It felt like we were sitting on the edge of the world and even though it’s a long way from Tampere if you ever get the chance to go, do! Jarrah, me and my host dad Mika @ Koli

On Tuesday Asha arrived and spent 2 days with me in Hämeenlinna and then we hopped on an iconic and well supported by the Aus JWOC team, “onni bus” to Tampere. We went mental when we arrived at the AirBnB accommodation. Asha was nearly crying over the never ending (I swear) tea draw and I was doing the same over the spice draw even though I couldn’t understand what any of them were. We also found a perfume cupboard, we’ll all smell nice every day this week by how its going so far. 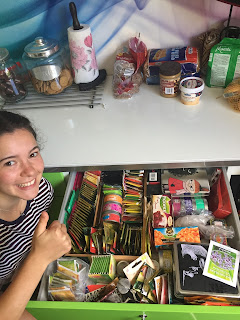 You can almost see the tears in her eyes

We met Toby, Tara and Caroline on Friday and already have some funny stories to tell. Asha and Tara bought 2L of banana yoghurt (its been a year of withdrawals for them) for 3AUD but with the amount of money we saved on maps I think they could buy about 50L and we would still be ahead. Jarrah had a bunch of maps from around the Tampere region and we also found a photocopier, Ralph, we know you'll be proud.

The main bedroom has a mirror on the ceiling which makes us girls giggle (just gals bein chicks) before we go to bed. But not as much as the keys which has a naked guy in a pool doughnut attached to it. 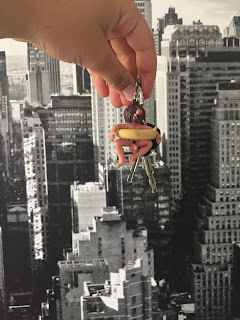 Do look closely
We weren’t so happy about the jukebox being broken though, I suppose we will just have to wait until the after party to play Nollsy louder than our phones will play it.
We are all feeling pretty tired after today’s long training but a few times over listening to the *house* 2009 remix of Down under kept us going.
This weekend was the mid-summer weekend for Finland, lots of places have been shut and public transport hasnt been normal. This has made busses a bit of a struggle so we didn’t get to go to the map we originally wanted to but you can’t win em all hey.

We ended up going to a map near Hervanta, called Makkarajärvi ('Sausage Lake') but were nearly eaten alive by mosquitoes so we were out of there pretty quick after we finished our session.
Sim joined us today and we have done one of 2 sprint trainings planed so far. We went to Epilä
this morning and are going to an organised training by Tampereen Pyrinto at the Grano games map, Järvensivun Koulu, this afternoon. 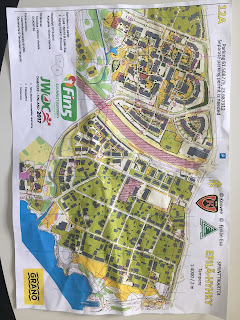 Epila sprint intervals
Joe and Jarrah will join us on Monday and then we have a few days of solid training with the 8 of us – should be a blast!! Can’t wait to see more of the team arriving, feels more and more like jwoc everyday 😊 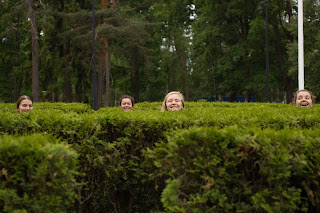 Share this blog when you find the 5th head (Hint: there's a Tasmanian in the photo)


Another update coming soon, along with the first series of our quote list for 2017.